Here at 79DESIGN we tend not to do reviews on products as we don’t get many new ones in, but recently we needed some Airpods for business travel.  Safer and more convenient than all the cables, plus we heard the sound quality is better than the standard ones with cables.  So here is our real world review of the Apple Airpods 2 (2nd generation).

Initial Setup – on many devices

Much has been said about how easy they are to connect to your iPhone, and yes they are.  No question.  They are delivered with good charge, so pop them open and within about 5-10 seconds the popup appears on the screen, to ‘Connect’.  Done.    It’s a nicely animated screen, but does save you time trying to locate the Bluetooth section in your phone. 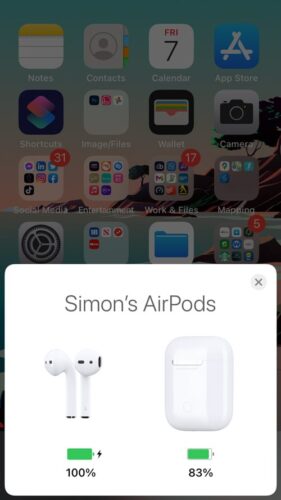 So they are connected.  Job done, check!

Next, let’s connect them to the iPad.  Same routing you might think, and yep seems to be.  However, if you just leave your casing lid open and go to your iPad…. nothing happens.  This is where it can be a bit manual.  There are two ways to do it.

Since it cannot connect to multiple devices at once, you do kind of need to tell it “done with that one, now this one”.  Can make it slightly manual, but it is in your ‘cloud’ of bluetooth connected devices.

And finally onto the Macbook (whichever variety you have).  This has no popup that we can find.  You do have to go to Bluetooth settings and manually ‘Connect’.  There appears to be no “lid down… closed ipad… lid up” process here.  Unless we are missing something. 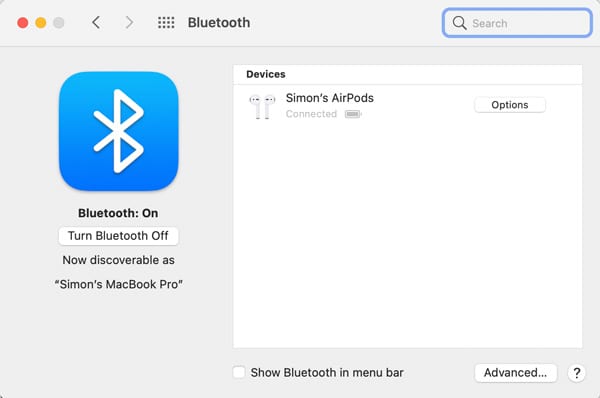 The Lid itself is very nice, and feels really solid.  Only gripe – you cannot hold the case and open it with one hand.  That said, why would you when you are going to use your other hand to take the earphones out.  Well, think of it like a lighter and how satisfying that can be to “flick it up”.  You cannot really do that here.  Well not easily anyway, you have to hold it in a certain way to do it.

Inside the Airpods case is a little led light.  It shows different colours depending on it’s level of charge – green for full… etc.  But here’s the thing, the Wireless one has the LED on the outside, the wired one is on the inside.  Why?  Is that to show you the difference?  Doesn’t really make sense.

We like how strong and robust the lid is.  We bought a JBL set of inner ear ones and that case is nothing like as solid.  It’s a neat little box.  Highly polished in white or enamel colour.    Probably white.  The earphones go in their slots really easily, and they just drop in nice.  We’ve had others where you are always trying to figure out “how the heck do these go in here?”.

Connecting to your Device… when you need it

After a month or so of use, we have found issues with connecting, particularly with Amazon Music.  you open the lid and within maybe 5-10 seconds you get that nice popup to say it is connected.  Put your ear phones in and play some music, but wait, why is it playing it from the phone?  Yep – sometimes it says it is ‘connected’ in the Bluetooth options, but Amazon Music takes some work to make it run. The answer sometimes is to put them back in the case.  Close lid, then start over.  It is not 100%…

The design – white only

These do just come in white, but we think they may come in more colours one day, even just black.  White is their iconic colour, but more and more is being said about wanting them in black.  If they were available in black, we would have gotten that colour – good question – difficult to answer, but probably.

What about listening to the Airpods 2?

Really good.    End of discussion?  Well kind of, they are really good.  Better than we thought.  We had tried some of those where the wire goes behind your neck, but they were not as good as these.  You do forget them are in your ears.  The Hey Siri does have a response, though others say it doesn’t.  When you say “Hey Siri”, it goes a bit quiet, as those he/she is listening to you.  But you don’t need to wait for it.  Just say “Hey Siri turn it up” and it will go quiet…. then increase volume.  So while this new chip is meant to be quick – god knows how slow it was before as this is not that quick.

I am a big fan of bass.  Got some Beats headphones (wired) and they are pretty bassy, but you ears do get hot after just 20 mins or so.  I had some JBL earphones from Amazon.  These had no bass.  They went back.

These Airpod 2 DO have bass.  So far, I am impressed.

While writing this article, I’ve been out more with them, both on a windy weathered walk, and just back at base.  On the walk I took a phone call, and even though it was windy, not once did the person say “are you outside as I can hardly hear you”.  That compared with some purpose-built bluetooth earphone for phone calls, where they did complain, is quite something.

Listening to Jess Glynne’s, Don’t Be so Hard on Yourself, the audio is clear, the bass is crisp and pretty deep.  One of the things I was concerned about was – are these just like the wired ones…. only wireless?  Absolutely not.  These are hands-down a different kettle of fish!  They are louder (prob more sensitive speakers), deeper, and just better sound quality.  I am not an audio expert at all, but I know what I like.  And these do produce better bass and sound than the JBLs listed above.  Far better.

These work with Siri of course, but keep in mind, if you use Amazon’s Prime Music, they do not allow you to say  “Hey Siri, play Thriller”, as it will tell you it cannot find it on Apple Music, if you don’t have an account.  It seems to be tied in with that, instead of any other music App.  However, it will skip tracks, pause etc.  But put the ears in, walk away and ask it to play a track – it won’t.

Request to Apple on the Airpods 3 version

You can double tab it to do this, but wouldn’t it be an amazing patent, to allow the user to swipe their finger up/down to adjust the volume.  That would be cool.  Tim Cook, you listening?  Naaaa probably not.  But imagine – double tap and SWIPE.

They do not have that function, but then why would they?  Most of those are for the ear phones that you push into your ear, almost to your brain!!!  There are just simple ear phones, but with the volume at a good level, you forget things around you.  I’ve not used these on a busy train yet, or noisy cafe, but I will one day.  And when I do, I’ll update this blog with news on that.  It could be very soon indeed……

They will be tested in a windier place soon, but on a walk recently when it was windy, but near buildings, there was not a sign that they were going to fall out.  You do sort of forget they are there – unlike those you push into your ear canal.

As ever, Apple charges the full whack for these, but you can get them cheaper on Amazon.  These cost £123.99, and were delivered in their usual nice packaging.  Only gripe – they still have the cellophane that can only be removed by a sharp object.  Be nice if there was a ‘tab’ to pull.  But still, all arrived nicely with the charging cable.

These will be used for travelling on trains and busses, waiting for clients in cafes, and Zoom calls probably.  Plus person use as well.  They do feel a bit special, and like so many, when they were announced at a WWDC sometime ago, I thought “what…. what the heck now?”.  After getting rid of that lovely headphone jack (still a big mistake), people had to use other devices to listen with.  We don’t get to always get the latest Apple products when they come out.   Only when they are needed, or if something is slow.  Or like this device, it’s kind of needed and is a more modern way to do things.  If you are out for a walk, or walking to a meeting and you want some musical distraction, it’s better without cables flapping around your clothing.

There are Fake Airpods out there

We looked online at these Airpods and found a video of a guy that buys about 5 ‘others’ that are replicas, but not sold as “Apple Airpods”.  They just pinched the design, and not very well either.  This video shows him taking the case out of a rubbish box, and it’s covered in cheap cellophane.  And then the case is bigger than the real thing, and they has to ‘pull’ them out of it.  Unlike this Apple genuine one, where they ‘drop’ in the slots beautifully, and click.  The fakes, he has to ‘push’ in, and then ‘pull’ out.

The shape of them is unlike the real thing too – always bigger.  The fake cases are definitely bigger.

Our advice: do NOT buy anything that looks like it might be real, but isn’t.  If it is on sale for about £5-20, it’s fake, and when you get it, it will be rubbish.

Yep, these things are pricey.  Even if you get them discounted from Amazon.  But here’s the thing, you can feel the quality.  The clicks, the way they fit perfectly in the slots.  The shape of them.  Even the weight of them, they feel like quality.  Some cheap one you close the lid and have to snap it down.  Or they feel thin or cheap.  These don’t.

There are countless YouTube videos and written reviews from reviews on whether or not to upgrade from one to the other.  I’ve never had a setup of these, so when I decided to get them, there was no question about which ones to get.  But if you have the older ones, I doubt if the additional features of these will quantify the extra cost.  Not sure if you can sell the others online, but if I were you, wait until the next set are released, as they may be in other colours.  But I couldn’t get an older version, if the newer ones were just that bit better.  And the Hey Siri features is a little better than reaching into the pocket to change the volume.  While there is a delay, it does work.

https://www.mirror.co.uk/news/uk-news/critical-covid-patient-who-refused-25962160
This and countless other stories, show how important it is to be fully vaxxed. He might have still been there, but nothing like as bad. #nhs #covid19 We are fully vaxxed and proud of it. :)

Misty day in Spalding. Weekend off work. Tho doing some behind the scenes stuff. Exciting. :). #lincolnshire #spalding #wordpress #weather

What is WebP – can it help my SEO?

A day in the life with WordPress