We recently bought a new Amazon Echo, in the grey colour.  It was a decision made so we could call up music from a Music Unlimited library without having to get up and use phones or devices to do it.  We had seen one in action for someone very non-techy, and they use it with absolute ease.

We have had Apple Music for a while for £9.99 a month, but with Amazon’s being £7.99 a month (for being able to download the music too), it seemed a clear decision to change.
Note that for £3.99 a month you can have the same thing, as stream-only.  So you won’t be able to download music to listen away from wifi/data.

One of the primary reasons for the switch is Siri – it’s just no good when it comes to requesting music.  Ask “Hey Siri (btw… why hey…), play George Ezra’s new track” and it will.  But if you decide part way through you want to change track, pause or whatever…. Siri ignores you.  It’s as though the audio coming from the speaker is drowning out the person’s voice.  I actually shouted at the phone to stop or change track, but it refused.

Enough is enough!  Having seen that Echo is genius at doing this, and if you are playing loud music, you can shout at it to make it listen, or even use the app on your phone, it seemed like a great move.

We had seen the Apple HomePod due for launch in February 2018 (not available at the time of this blog), but that has so many negatives for our liking. 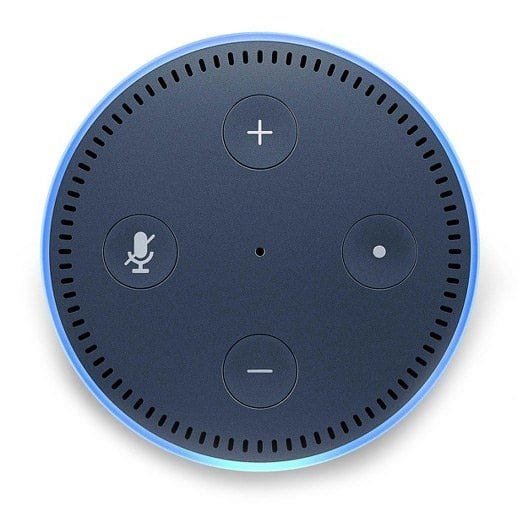 There are other little things, but these are the main ones.  We like it.  I do personally wish it could be used after a charge, so you can take it into the garden. Amazon has missed a trick there.  But it’s the only real gripe about it.  We also like that you can change the cover if you want.  Go Walnut, or Black Cloth.  They are about £20.00 for a cover, which isn’t cheap, but look good.  Ours is the grey one.

We have also found Amazon Echo good for asking questions too; not just the music. Asking what a word means, what the weather is in a few days time, and even your diary checks.
If you have an Apple iCloud account, you can configure it to see your diary, after a few security processes with Apple, which isn’t too tough (2-stage verifying stuff).  Maybe it can check texts and emails too.  It has a lot of ‘Skills’ you can enable.

If you know of any really good ones, do let us know in the Comments.  We are keen to hear what others say about it, specially if you are local in Lincolnshire or the surrounding counties.

Finally we also like to add that it’s good with the Smart Home features.  We bought a couple of plug sockets that work inline with a given plug.  Sync it thru the app (using a Smart Home ‘Skill’), and you can say “Echo turn on dining room lamp” and the socket you assign as such will switch the lamp on.

It’s laziness, but does mean you don’t have to walk over and lean to switch off a light.  Just ask it to. Or if you are in another room and you forget, tap it on the app!

Live the dream, and get a professionally designed WordPress Website, by 79DESIGN. Fast response support, fast hosting, and SEO. The dream for your business.

We recently provided some support to a local lady called Laura, to help her with her WordPress website.  She had a company design it for her, but in a really bizarre way, to the point it was handed over, wholly unfinished. READ MORE.

Instagram
Live the dream, and get a professionally designed

Spent a few hours with the lady of local Wedding E

This summer, #relax, #unwind... your #wordpress we

We've been having fun with design lately, trying n

WordPress Maintenance, with a friendly face, and e

We are ready to support, energise and provide a pa

We are all about websites that make you feel good.

A website you can edit. No need to call your dev

What we do is honestly not rocket science. But it

Hate waiting for a new website, or support, or to

We'd like to welcome Sian and Ian to the family, w

Had a lovely meeting this morning with a supportiv

An Afternoon of Onsite WordPress Training

This site uses User Verification plugin to reduce spam. See how your comment data is processed.