This review is about the Apple Watch, it’s based on the series 3, but it could be about any of the versions as the feelings about it, do pass all those that have been issued by Apple.

This review is not about the speed of the device.  It is not about comparing GPS with Cellular, or Stainless Steel with Ceramic.  This is about very obvious things that we found upon inspection at an Apple Store.

This Apple Store was in Cambridge.  Very nice staff, helpful.  Not pushy.  Informative and honest, even about price (of straps – phew!). 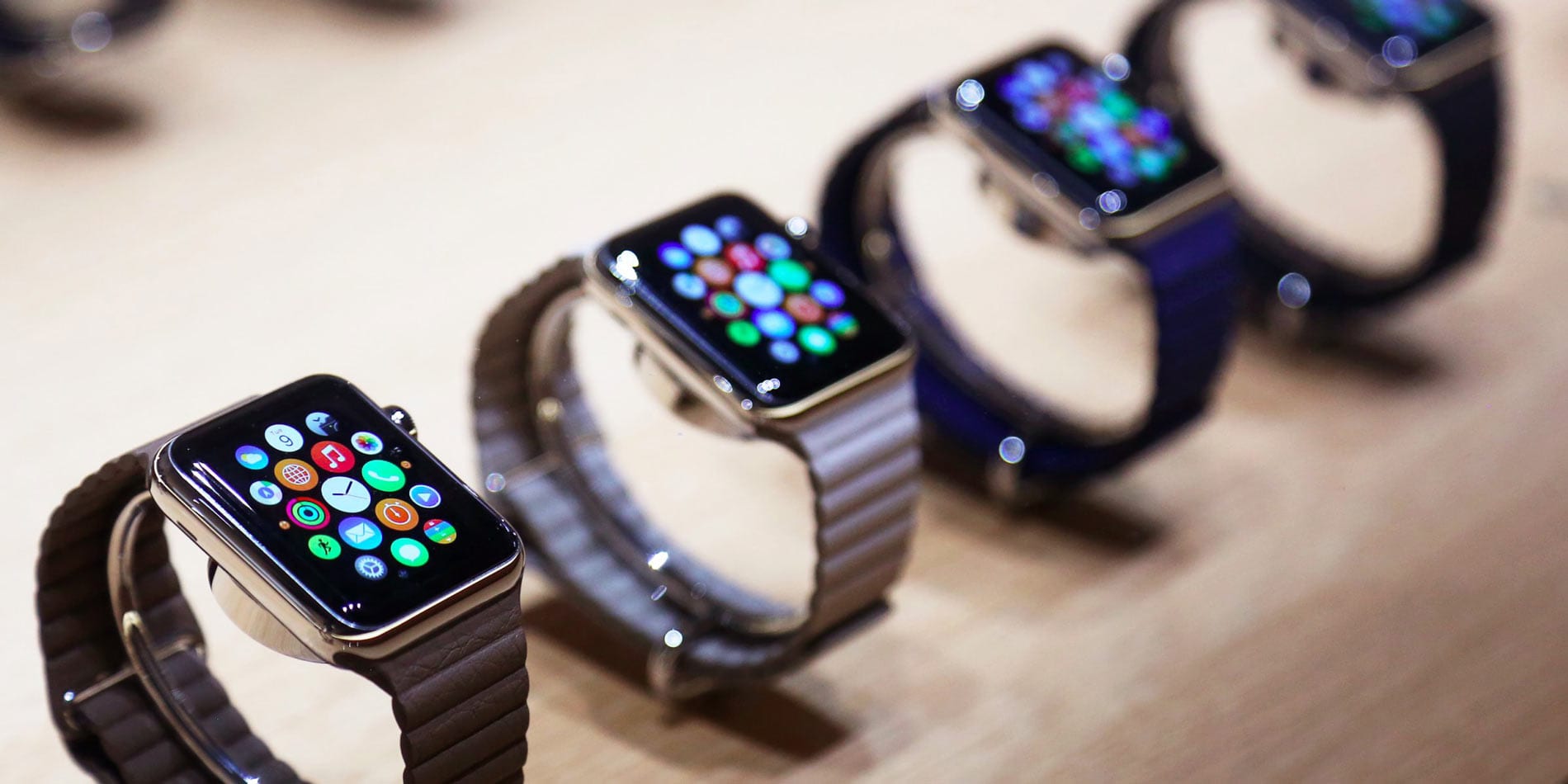 The first thing we did was to put an Apple Watch on.  This was with the sport strap.  Not that awkward, but took a bit of time.  The plastic feels very nice, soft but when it’s on, it doesn’t really mould to the shape of the arm, but just goes ‘around’ it; a little like an oval bangle.  Then the Milanese Loop.  Man this watch looks chunky! 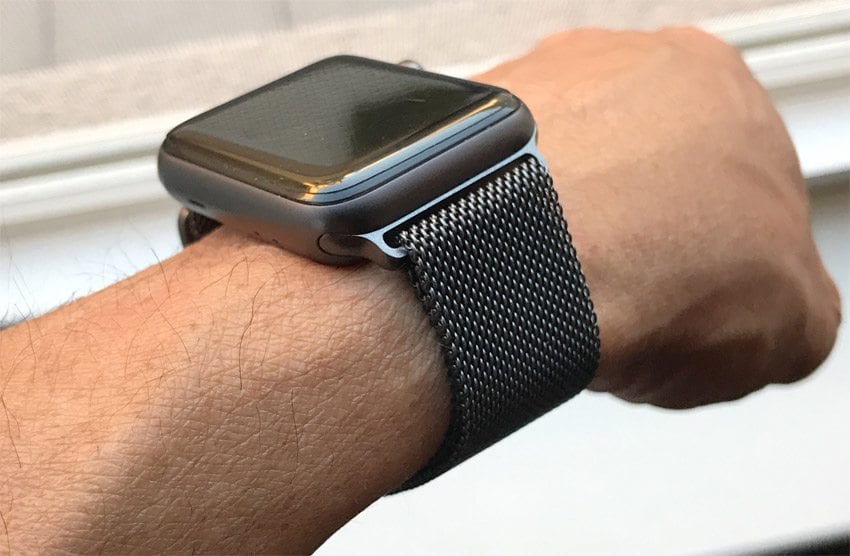 So we switch for the Milanese loop.  Easy to put on, though you do have to really think which way around it goes.  It’s not obvious; both in terms of which slot, and which way around.  But once you get it right, it fits very nicely indeed.  If this was a fake one, it would be very tight or very loose (having seen the videos of fakes).

Once on, putting the Apple Watch on is really easy.  The ‘feel’ of the black one is different from the stainless steel one.  It just feels a bit less shiny-smooth.  But it does feel strong and comfy.  Would it feel comfy wearing it for a day, who knows.  Most reviews say yes.  This was wearing it for just 5 minutes!  So couldn’t fairly give a review on timely comfort.

How does it feel to use when wearing it?   To press side buttons .. to tap on things.

You really do have to look at the screen close

If you are just tapping the screen icons to open something, it turns out you have to look relatively close to it, to ensure the icon is in or near the middle of the screen, but then it does seem to know what you meant to tap.

If you want to press the crown, known as the Digital Crown, it does ‘twist’ the watch somewhat, which feels a bit odd.  Looks a bit odd too.  The button is simple and you tend to click that with a thumb on the other lower side of the Apple Watch, but do that with the crown and you tend to hold the opposite corner of the watch, thus making it twist.

Turning the Crown is a doddle and is ok.  It’s quick too, so you have to look closely at the screen to make sure you don’t go past, whatever it is you are looking for on the screen.

To use this every day, we need it to run WhatsApp, as many of our clients use that, and if we want to give them the timely service, even via a watch, WhatsApp has to work on it.  Sadly, even with hundreds of millions of users, WhatsApp does not have an Apple Watch app!  {falls down in amazement on the Apple store floor}.

This is just an unreal discovery.  You can iMessage, and even Facebook Messenger, but no WhatsApp, which apart from WeChat in the Eastern parts of the world, we think is the largest Chat system available.  Maybe wrong?  Let us know.

We opened a message on the watch (nearly said the phone then!), and went to look for the quick replies.  Didn’t find it as simple as people say.  It looked like you have to scroll to the bottom to get to them.  Maybe we made a mistake there, but if that is true, pity if you have a long thread.

Yes this is a cool thing, but it’s shocking that one ONE network in the whole of the UK does it.  EE.  Even Plusnet which piggy backs on them, doesn’t have it.  That said, the battery is drinks up – makes the watch a ‘drunk’ when on the phone.  So pass!

The sport strap is nice.  Feels like it will last. How it is worth £49 is quite beyond us, but there you go.  The downside is you have to pay for a strap as part of the watch when you buy it… even if you hate the colour of the strap.  Surely Apple could be sensible and let you order the watch ‘face’ and strap separately, so you get exactly what it is you want.  You are going to have to take it apart anyway to switch for another strap if you buy one, so just let the customer do that at the start, and buy “only what the customer wants to buy”.  THINK… APPLE!  (oh they are, money….).

…. sorry this isn’t kick Apple in the…. head… day.  It’s just something most people think anyway when it comes to massively over inflated pricing from the fruity company.

The Black Milanese loop feels nice, but sorry – £199 for a strap, that is more than half the cost of the watch we held, is unreal.  Absolutely unreal.

Feels nice, yes.  But £199 is really telling customers “we don’t care… we can charge what the heck we like, because you will pay it”.

That said….. the stainless steel version is £149, and does feel nice.  It’s smooth.  Doesn’t feel like it will move about much.  From what we have read and seen, the view is that it will easily outlast any cheap ones on Ebay, which seem to lose their quality in weeks.

The Velcro one is nice too.  The Hermes one… ok let’s not go there Mr Zillionaire who can afford one!

Will we get one to use?  No.  Why?  WhatsApp, and frankly, the watch is pretty chunky.
The gut feeling is, the series 4 maybe be a little bit magic.  Maybe it has done the iPhone/iPad thing, and suddenly gone to the thickness of a pencil, or at least a third of it’s current size.  Maybe finally “yes you can now do WhatsApp with it”.

We can only hope.  But for now £359 + £149 for a GPS aluminium Apple Watch with classy strap that is rather chunky, doesn’t do what most people use every day on their phones (WhatsApp), and does feel slightly odd to use….. Sorry.

But wait, what happened after the Apple store visit….?

Sitting in one of the many Cambridge Starbucks, looking at the iPhone7, with ease.  Replying to emails.  WA messages and checking a few online things seemed so very easy to do.  Coffee in one hand, phone in the other.

Sitting under a tree in the lawns near the bus station.  Looking down to see a message coming in. Easy.

https://www.mirror.co.uk/news/uk-news/critical-covid-patient-who-refused-25962160
This and countless other stories, show how important it is to be fully vaxxed. He might have still been there, but nothing like as bad. #nhs #covid19 We are fully vaxxed and proud of it. :)

Misty day in Spalding. Weekend off work. Tho doing some behind the scenes stuff. Exciting. :). #lincolnshire #spalding #wordpress #weather

Web Chat with us today!